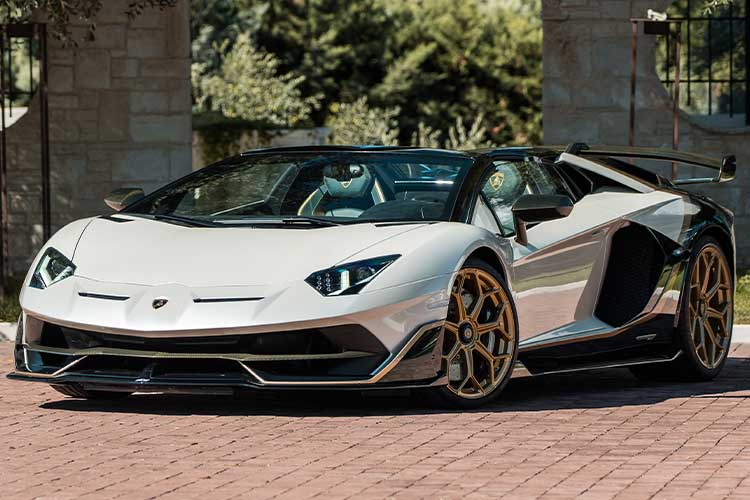 Bonhams will showcase its own collection in the city of fashion when it stages its new Milano Sale, the auction house’s first collector car sale in Italy for five years, during Milano AutoClassica in the Fiera Milano Exhibition Centre (Rho), on Friday 18 November.

The stars of the Bonhams car catwalk are a duo of Lamborghini supercars, the embodiment of Italian power, style and engineering. The first is a 2019 Aventador Ad Personam, created through Lamborghini’s tailor-made programme allowing a select number of owners to create their own bespoke or ‘couture’ car.

This example, one of circa 350 roadsters built, is equipped with many options totalling €125,000, including lift system, Sensonum audio system, carbon wheel pack and carbon ceramic brakes. It is finished in pearl-effect white paintwork (Bianco Leda Pearl), with striking green details and green carbon fibre accents, over dark green leather interior, with gold detailing.

Displayed at various motor shows around the world, this Aventador was registered by its sole owner earlier this year and has only covered 100kms. It has an estimate of €900,000 – 1,100,000.

Its fellow Lamborghini offered at the Bonhams Sale, a 2022 Aventador SVJ LP780-4 Ultimae, is already a collector’s item. As its name suggests, it is the final and most powerful naturally aspirated 780bhp V12 edition of the model, celebrating 10 years of Aventador production. Only 250 roadster examples were built, with 15 of these famously sunk with the Felicity Ace cargo ship in the Atlantic Ocean en route to delivery in the USA earlier this year. This example, showing delivery mileage only, has an estimate of €1,100,000 – 1,400,000.

Lining up with the powerful pair is the result of the first collaboration between the carmaker and neighbouring motorcycle manufacturer, Ducati. Unveiled last year, the limited-edition 2021 Ducati Diavel 1260 by Lamborghini, named ‘devil’ in Bolognese dialect, is inspired by the Sian FKP 37, the first Hybrid Lamborghini.

The power cruiser – already Ducati’s flagship model with its powerful 1262 cc Ducati Testastretta DVT engine and fully adjustable Öhlins suspension – has been enhanced by signature Lamborghini design cues such as its carbon fibre bodywork, lightweight forged aluminium rims, hexagonal exhaust tips and a ‘Y’ motif featured on the seat. Number 351 of a limited-edition of 630 motorcycles, this machine is a must-have for any Lamborghini or Ducati collector and has an estimate of €80,000 – 120,000.

The Bonhams Milano Sale will present more than 50 collector cars, representing other great Italian and international marques, including:

1969 ISO Rivolta Iso Grifo Targa, estimate €650,000 – 750,000
One of the rarest and most coveted Italian collector cars, this open version of the high-performance GT was conceived in Milan, created by the city’s Carrozzeria Pavesi. Over four years, fewer than 20 Targa variants were produced. This later car is presented in metallic green.

Also offered are modern classics from the likes of BMW, Porsche, Fiat and Lotus, with further cars to be announced. The online catalogue can be viewed here: www.bonhams.com/auction/28272/milano

Per entrare in Fiera
a Milano AutoClassica